As if the cable car ride up the mountain was not thrilling enough, once we reached the top of Tianmen mountain, we were led around a cement trail atop the circumference of the mountain. No picture is enough to capture what was magnificent and completely mind-blowing at the same time. Looking off into the haze of clouds that swirled beneath us, I felt like I was looking out of the window of an airplane…but yet I was standing with a hand touching the face of a mountain on my other side.

I don’t know if you’ve ever walked around a mountain….but it was my first time.

Sections of glass-bottomed paths provided a truly exhilarating experience. Seriously, where else on the earth can you walk out on an I-beam supported glass walkway to what seems like….nowhere?

Only, this one’s not stopping anytime soon. Everytime we peaked over the crest of one mountain, more clouds enveloped our view and more mountains appeared, looming in the distance.

Supposedly the longest cable car in the world (though there hasn’t been any fact checking post-trip), 15 minutes into the ride, I started believing that fact to be true.

Seriously though, are we there yet?

A long day ends perfectly with sitting outside a local restaurant and enjoying a good local beer.

The minority group of the region call themselves tu jia (土家), which roughly translates into earth familiy. Looking at the menu, the locals prefer meat-based foods with lots of preserved and wild mountain vegetables. Also lots of spice, and as our (mediocre) dinner proved that night, very salty.

My favorite part of any trip is the chance to get chummy with the locals. Which is why it’s nice to travel with the DiploMan, who is just so good at making friends with them. I suppose it’s his “Arab” good looks or perhaps his “exceptional business skills” or his “amazing Chinese”, all of which were presumed that evening.

Don’t think we were getting wasted over the cluster of beers on the table, either- each of those light and tasty local beers were 2.5% ABV (alcohol by volume) per bottle.

Hola! I was just in Mexico City, where I was met with an unexpected chill in the air, skies and clouds for days, and a city that extended far past what I could see from the 28th floor of my hotel.

La gente spoke less English that I expected, so I was forced to pull deep into the trenches of my brain back to Caminos Peligrosos in the 10th grade, and managed to squeak by with my present-tense-only Spanglish.

But I accomplished what I had gone to Mexico do to: Eat plenty of tacos, climb a pyramid, witness the beautiful ugliness that is the “Mexican truffle“, and watch my best friend get married. Not a bad checklist.

It’s between lunch and dinner, so I’m going to step away from food- just for a sec. So, let’s focus on the other end of food production: that being waste.

One of the few books I’m in the middle of reading right now is Anna Moore Lappe’s Diet for a Hot Planet, which sites source after source of how the global food system is even ahead of fossil fuels as a contributor to global warming, particularly with East Asia becoming more and more Westernized in their living and eating habits.

It’s not just about trying to eat locally, either, though that’s a big part of it. It’s the other end of your meals that you don’t think of- literally, the other end: Waste. The disposal, treatment, and reusage (or, lack of reusage?) is detrimental to the planet not only due to improper storage and space needed for waste processing, but also for the tons of gases that waste products are emitted into the air each year.

Garbage collection is a topic that is much larger than I’d like to tackle in this one post. Recycling is another, and composting food waste, well that’s a few more posts, too.

So how do I come to think of an issue like this when I’m visiting another city? Well, walking back from dinner the other night, there was a cluster of of people standing on the street corner, all staring in one direction. Naturally, I thought they were waiting for a bus. But my Uncle, who pointed them out to me in the first place, asked me to take notice of the bags in each person’s hand- and revealed to me that they were actually waiting for the Garbage Man.

The Garbage Man comes everyday of the week (save Wednesdays) at a scheduled time, which will depend on what street corner is closest to your home. On our corner, we hear the prompt 8:40pm whistle that sounds more like a cell phone alert (really, this truck plays für elise) than any garbage truck I’m familiar with. Residents of Taiwan come out  of their tiny apartment buildings like a scatter of cockroaches- all heading towards the rear of the truck with their sorted garbage- plastics, paper, garbage, and most exciting of all- food waste.

Yup, compost. The city has set up a legit compost collection service in addition to regular garbage and recyclables. Where the regular garbage (and recycling) are thrown into the back of trucks, the compost is emptied out into storage tubs, ones that look very similar to the plastic cylindrical garbage cans we have back at home.  What is thrown away as actual garbage- sans compostables and recyclables, is only a fraction of the waste a home produces.

I couldn’t help think back to the book that is sitting on my nightstand back home. And though I don’t know much about the disposal process other than what was seen on the street that day, I’d say it’s a pretty good step in the right direction. Now, if we could do something about all those KFC’s in Asia… 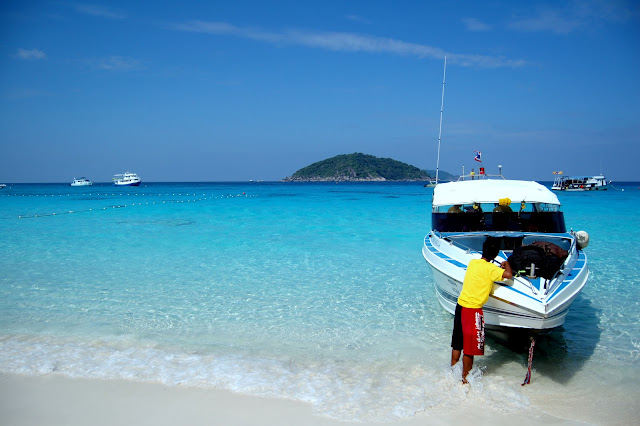 In doing some trip research before leaving for Phuket, I discovered a small archipelago just off the Northwest coast of Phuket called the Similan Islands.  Owned and preserved by Thailand’s National Parks System, the Islands are available to visit only between November-May.  Moreover, only four of the nine islands in the archipelago were available for visit (and one set up for camping), so as to preserve the both the reefs and sea turtles who spawned on the beaches.  The more information I was able to dig up on information on the islands, the surer I knew this was someplace we just HAD to visit.  As soon as I mentioned the islands had limited access and sea turtles, B agreed.
Being very uncharacteristic of the DiploMan and myself, we decided to book a set tour to the islands (and blew almost a third of our budget doing so).  Really, there was no alternative- our lack of knowledge for how to get around Thailand prohibited us from hatching any genius plans to reach the remote cluster of Similan islands.  Plus, this two-day-one-night package was all inclusive, from picking us up at our hotel in Patong, to transporting us an hour and a half via speedboat to the island, to multiple snorkel sites around the islands, to lunch on the beaches and our own personal tour guide throughout.
I don’t regret a penny of this purchase- it was far and wide the highlight of our trip.  The beaches we visited had sand that reminded me of a coarse flour meal, the water lapping up against the rocks assured me why the color Aqua was named.  the DiploMan and I scoured the night for critters and creatures (as much as I could scour the night), and found sea snakes, crabs, land snakes, fruit bats, and glow in the dark plankton that lit up when you hit the water.  I became adept in my snorkel abilities, and with the 30 or so foot visibility under the clear waters, saw sea turtles, an octopus, a moral eel, and hundreds of reef-dwelling fishes.  Minus the mosquitos- those darned creatures- I’d say it was a pretty ultimate experience. 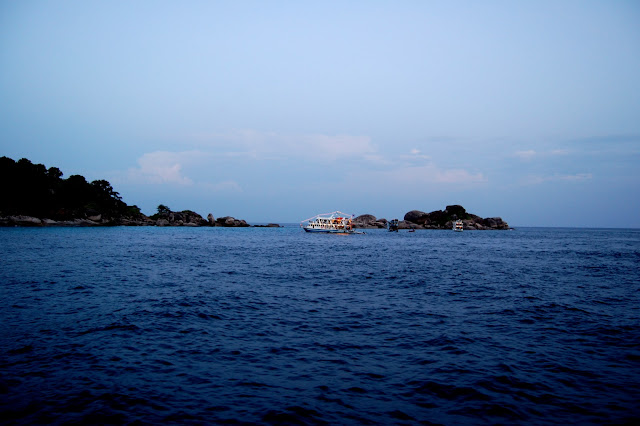 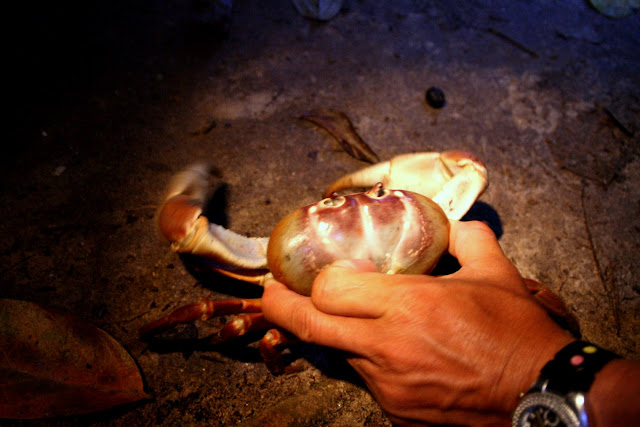