In the several attempts I’ve made to take a photo of the many tropical trees here blowing in the wind this time of year (my favorite tree is a scrawny tropical fir variety, think Charlie Brown Christmas style), I’ve failed. All my pictures that I’ve romanticized as being dramatic fronds blowing in the wind just turn out to be…well, photos of trees. Really, they’re so boring I don’t even want to post them up to see. And I’ve realized that in order to get a photo of a tree that looks like it’s blowing in the wind, the wind has got to be blowing pretty hard…like, during a hurricane, or something.

But enough of severe weather talk, I’m sure you’re all sick of that in the states. Let’s talk about subtle weather changes, shall we?

When I first arrived into town on June 1 of last year, everyone told me it was the BEST time of year to come. And I saw truth in that, for I could wear jeans and a tank top out at night and be very comfortable. “Just wait until the summer” they told me, “it gets HOT”. So like a good expat newly adjusting to a foreign lifestyle, I waited. Then in September, I discussed the then-four-month dry spell with our gardener, who was now coming every morning to water our plants as opposed to the three days we hired him. “They have to get water,” he stressed “or else they will die in this dry season. But the rainy season will come this year….maybe”. So I waited, because the maybe-rainy season was something that I was somewhat looking forward to, in solidarity with my Autumn-raving friends who were Stateside.

Then in October, we had the short rains. So short, I wrote about them once, here. They left, then came back with a vengeance in November, but then quickly left again. People told me the rains were getting shorter and shorter every year, and that the summers were long and drawn out. So I waited to see for myself. Thanksgiving came and went, Christmas and New Years’ did too. And well, we’re well into January now. And while I thought that Dar was going to be painfully, excruciatingly hot by now–while I’ve been waiting for over six months for it to just get so hot my flip flops would melt as soon as I stepped outside–I’m officially declaring: it’s not that bad yet. Sure, it’s not fun to run a mile in the midday heat with the equatorial sun glaring down on your shoulders (five minutes for a light tan, I’d say), but really, it’s not bad at all.

What has really surprised me are the winds. These kaskazi winds, that no one told me about, that have so pleasantly surprised me, that are turning the start of this summer into a beautiful and bearable time of year. In fact, so far, my favorite time of year.

Every night, these winds pick up, and as I fall asleep I can hear the trees outside our house rustling, almost so it’s like we’re listening to waves crashing or rain beating against the window. I’ve never really heard a warm summer wind rustle long palm fronds, but I’ve since recognized the sound. It’s like water, almost.

I’ve learned that these kaskazi winds, or Northern winds, come to my window from somewhere Northeast of here, having traveled down the entire coast of East Africa. They are the infamous trade winds, the winds that carried sailors and merchants and traders from Oman and Morocco, some even further from Arabia, India, China. They brought spices, fabrics, men, religion, drugs, and dialects, and re-located them first in Zanzibar, and then in Africa. In return, they took slaves–but that’s a story about another route, for another time. The spice trade, the slave trade, the mixed heritage of the Zanzibari people; none would be possible without these kaskazi winds.

The kaskazi winds repeatedly last from December to mid-March, wherein is the start of the long rainy season.  I thought, originally, that all Dar had was hot weather all year round, but I’m wrong. I’m getting so many things wrong about Africa, but happily so. The break down of the year here in Dar es Salaam is not really from month to month, or really even from Winter to Spring to Summer, but instead from weather pattern to weather pattern. I’m waiting patiently to see what the next change in weather will be, but for now, these kaskazi winds suit me just fine.

I was SO stoked to visit Cholula. Yessss, I thought to myself, I can plan a special tour for me and the DiploMan to visit the hot sauce-making plant. I can buy a case to get airmailed to our address in China. Maybe they’ll even have some special peppers for me to taste if I write to them ahead of time.

Before my hot sauce-saturated imagination ran off with endless pepper possibilities, I decided to Google the town to see exactly what the deal was. Part of me was not surprised at all to find that the small town of Cholula, about an hour outside of Mexico City, had no relation whatsoever to the famous hot sauce that I love and miss so dearly. Of course, the other part of me was completely devastated.

The Cholula that I had not expected to visit is a small town most famous for its yet-to-be-fully excavated pyramid. If you’re like me and think that all pyramids come in geometrically perfect triangles or sphinxes, you might be as disappointed as I was to encounter an utterly massive hill with a series of wide stone steps to the top.

On the other hand, after climbing to the top, and realizing that you’re sitting on a portion of a 400 kilometer x 400 kilometer manmade structure with the top razed by conquerors to house their church, you would start to realize (as I had) the magnificence and history beneath your feet. 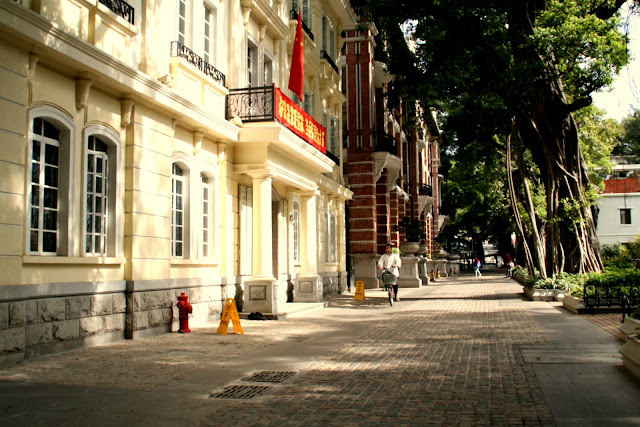 Hi all, and welcome to neighborhood!  Shamian Island is one of the many “islands” floating among the waterways in Guangzhou- home of the Pearl River Delta.  I say island hesitantly, as it is technically a sandbar with two canals dug out from the sides facing land.  This was done a few hundred years ago, when the island was handed over to European officials who built their mansions and their official buildings here to keep separate from the locals.  In fact, no Chinese citizen was allowed to cross the bridges without proper identification, and after 10pm if they did so they were liable to be shot.  Up until about sixty or so years ago, this still was the case.  Today what remains are beautiful brick roads going through the island lined with large, weeping banyan trees, and striking classic european architecture from the 19th and early 20th centuries.  It’s quite a different feel from the blocky high rises and flashy steel towers built around the rest of the city.

Because of the beauty and serenity of the island, it’s a popular leisure spot for locals and tourists alike.  Groups of middle-aged friends play a version of Chinese hackey sack on the river walkways.  Workers nap on the benches in the shade during their lunch hour.  The elderly sit, stroll, ride on their bikes through every road and alley.  They bring their children, and their grandchildren who run through the courtyards, pick fresh flowers, and climb on the statues.

What you see most, however, are what the DiploMan and I like to call the trifecta of Shamian Island.  Truly, within five minutes of walking out of our building, you will see one, if not three of the following:

1)  Photo shoots: (of the B-list variety) Guangzhou is one of the largest manufacturing cities in the world.  The ports around Guangzhou/Shenzen rank fourth in the world’s largest ports, for there are hundreds of millions of tons worth of goods coming in and out each year.  Things are “Made in China”, and there is a good chance that most it comes from Guangzhou.  With clothing, these manufactures need to create catalogues for their buyers, thus where the overdone models and cheesy photo shoots come in.

2)  Wedding photos: Young american couples are known to have engagement photos taken.  In China, it seems to be the custom to dress up in a lacy white dress, get made up, and pose for photos with your husband who wears a white tux.  These dresses are rentals, however, and often times you will see the bride wearing her jeans under her dress.  Wedding companies have set up shop on the island, and you will often see them zipping couples around in their go-carts, from one shoot location to another.

3) American couples with their Chinese babies: So many of these.  We live next to the White Swan Hotel, who swells in popularity with the number of Americans who come to meet and adopt their future children.  This started a few decades ago, when the American Consulate was built next door (where we live).  The visa section of the offices have since moved, but the American couples staying at the White Swan have not.  As a result, a separate mini-economy has boomed on the island.  There are signs at the laundry shop to rent a stroller for the day when you drop off laundry.  Little shops selling children’s clothing and shoes are littered throughout the streets.  Souvenir shops sell all sorts of little trinkets, engraving names both in Chinese and English to commemorate your new baby’s newest given name.  At Lucy’s every day during lunch time, where they serve classic American dishes like burgers, fries, and fajitas, you’ll see exactly what I’m talking about.

It’s all a little odd….and I wish all of you at home could see these things, first hand.  To give you more of a taste though, here is more of a look around the island….