One of the many markets that I only recently explored was the local plant and flower market. Located just across the river from my home, I’m surprised I hadn’t ventured out sooner. It’s too bad, because there were aisles and aisles of potted plants and flowers, from as little as $5-$10 for a fern that reached my height. I could have definitely spent a pretty penny at this market, getting some plants for our house. It’s actually probably a good thing I discovered this market so late in our tour. Of course being in China, you can’t go to a market and not see a fire hazard. For example, this light, that was hanging down the middle of an aisle, dangling by a wire. Things like this used to scare/anger/annoy me, but now make me smile. I’m actually going to miss this stuff!!

Granted, this market wasn’t as exciting as say, the kitchen market, or the jewelry market, or the leather market. After all, they’re just plants. But as with all outings in Guangzhou, it’s interesting just to walk around and see the quantities of stuff being sold, advertised, and packed. Watching the locals go about their daily business is also akin to people watching at the airport- it provides a surprising amount of entertainment and amusement.

It was plenty hot by the time I was out- and being the middle of the day, business was slow. Shirts were off, cards were being played, women were sitting back fanning themselves. People were lounging like lazy cats all over the market, with ample amounts of shade created by the large overhang between the aisles. Where there was no overhang, there was plenty of plant shade to be found. I guess there’s definitely some benefits to be working at the plant market. A lot of people lounge around the streets in China- on the back of wagons, on park benches, on little plastic stools….but this guy took his afternoon nap to the next level. This corner, which I’ve passed hundreds of times, had never been subjected to any piles of trash or old furniture. It’s not even really close to any major buildings. As you might imagine, it made for quite a confusing and interesting sight. I also find it funny that he took off his shoes. As if he was going to preserve the quality of the couch?

Anyway, I just got back from an amazing 2-day trip to Zhangjiajie, in the Hunan province. It was my first trip to Hunan, which is where my paternal grandmother was originally from- and I learned why that side of the family likes such spicy and salty foods so much!

Zhangjiajie is probably more appealing to the masses, however, for being the inspiration to the fictional backdrops of Avatar. For example: In the last two days, I set foot on some of the most amazing landscapes I’ve ever seen, and visited what seemed like a surreal world. A lot of walking, hiking, and riding of cable cars was done. A lot of avoiding Chinese tourists was also tried, but alas it was inevitable to be drowned in the masses of matching group hats and portable microphone headsets. Still, it was an amazing trip. Pictures to come!

I love that Nelly song, it never gets old.

Bring you all back to Guangzhou, the weather is certainly making a turn for the warmer these last couple of weeks. Saturday and Sunday brought about a crazy wave of humidity that was lifted by two quick thunderstorms on Sunday afternoon. It’s been beautiful and breezy out since, but I have a feeling spring will be short-lived in this city.

The people of Guangzhou seem to be fond of heat- all throughout the “winter” months (mind you, it never dipped below the 50s, and stayed consistently in the 60s and 70s) I could barely push my way through a crowd with all the puffy jackets and fur lined hoods. Now, streets are again teeming with life, old ladies sitting out on the sidewalk fanning themselves and men, like the one above, taking an afternoon stroll without a shirt on.

I don’t think I’ll ever get accustomed to everything here in China.

As we approached this guy from far away, I thought he was making rice crispy treats.  But we soon hit a wall of aromas that included the sugar, peanuts and sesame at their purest- and my ideas of a chewy rice crispy treat were quick to be dispelled.  But I was not disappointed for long, as I immediately recognized the ‘candy’ that he had displayed in front of him as the Chinese version of peanut brittle.

With a small portable range set up in the back corner of his stall, among sacks of white sugar (not quite the safest setup, I noted), I watched as Brittle Man stirred a piping-hot wok full of sugar syrup with a flat wooden paddle. Without any other tools- no thermometer, no measuring utensils, no fancy stirring gadgets- he mixed peanuts and sesame seeds in with the sugar until a firm-yet-malleable consistency formed. Transferring his piping hot concoction to a flat table, he whipped out two massive blunt cleavers and pushed the peanut-sesame mixture back and forth, folding it over itself again and again.  As the stuff began to cool, Brittle Man patted and formed it into a large thin sheet, finally scoring the surface lightly with thin lines.

We purchased a small Ziploc full of brittle for a snack- it tasted like peanuts and sesame and sugar-precisely what I expected. The thinly-scored brittle surface allowed us to easily break off thin pieces, and we munched on the square rods of brittle as if they were pretzel sticks. 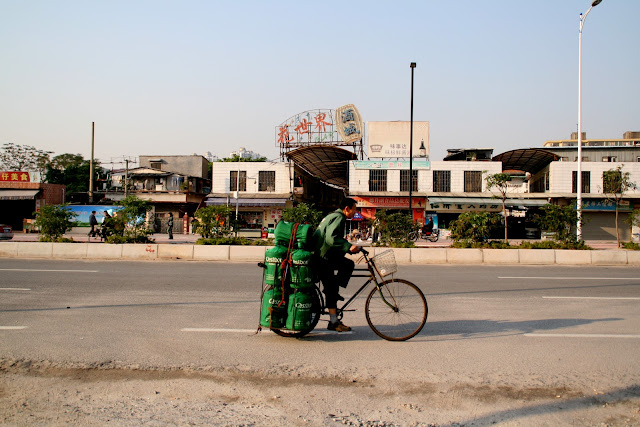 It’s finally Friday!!!  Sometimes I feel like the week goes along and I’m just bicycling with a dozen gallon jugs of water on my back.  Juuuust like this guy (there’s a bit of sarcasm there, in case you hadn’t detected it).