Happy Chinese New Year. There’s my grandmother on my father’s side along with my grandfather, looking pretty awesome. Tiny people!

Though I’m mostly Chinese and grew up with Chinese customs mixed into our American life, my family, strangely, didn’t really celebrate Chinese New Year in any huge fashion.

I went to Chinese school once a week every week, so during that one day of the year we would get little red envelopes with a $2 bill folded crisply in half, but that was about it for me and my sister. Other kids in my Chinese School class would boast how much money they received at home; even at the tender age of 9, I knew that $100 was an exorbitant amount for a second grader.

In lieu of cash, and I suppose without any regrets from any of us in retropect, the only consistent tradition observed by my family every year was an emphasis on food; a meal together on at least one night surrounding the New Year holiday. Even though this emphasis would always seem to come about more casually that naught, with either mom or dad saying something like, oh shoot, it’s Chinese New Year tomorrow, we should definitely have fish for dinner. If not fish than it was noodles, sometimes dumplings or 10-ingredient stir fry and 8-jewel-sticky rice or nien gao for dessert. Throughout dinner we would be asked the same question, as we were asked every year: do you know why we’re eating (insert so-and-so) now?

Though we rolled our eyes at the time, we were also nervously excited to carefully, with the calculated concentration so practiced by children, give the right answer. After all, if it’s anything that the Chinese are, it’s superstitious, and everything has a meaning attached. Peaches for fertility, dumplings for wealth, oranges for luck, cakes for prosperity, the list goes on.

The two big-occasion dishes of our household during all Chinese gatherings were fish, and noodles.

Fish was a favorite of mine, for its multiple symbolic qualities, some of which I could remember, some I could not. Always whole, usually steamed, with its beady, glazed eyes always seemingly pointing at me. On the table only because it of an eponymous misfortune (for the fish, at least); the word “fish” in Chinese is a homonym with the word for prosperity, and so, eating fish over the new year is extremely good luck (for the diner).

In traditional fishing cultures, as was the tiny island of Taiwan where my parents are from, it brings especially great luck in the year ahead. However one should NEVER flip a fish over on the serving platter, for this indicates a sunken boat and bad luck at sea. Rather, the spine should be lifted off the plate once the meat is picked cleanly from the bones. My sister preferred noodles, because she was a normal child and liked noodles over fish. I remember we were told, year in and year out, that noodles signified longevity, and more so than usual, we slurped as if the louder our inhalation of an entire noodle, the longer we’d live.

I’m surprised as to how much of this knowledge I’m able to recall all these years later, without hesitation and with great pride. Food serves many important roles, most fundamentally in its nourishing qualities, but to me, it’s also a reminder of where I’m from, and the family that I’m tied to.

It’s Chinese New Year today, and to celebrate, these noodles will likely make an appearance…well, sometime this weekend.

Optional: substitute shrimp, peeled and de-veined, instead of chicken. Or, broccoli, for a vegetarian option!

After the first couple of visits to the doctor, “rest” was all that was prescribed. Much to my drug-desperate pleas, I took her advice with serious action, not venturing out of the house for more than one hour at a time. When I finally felt well enough to move about the house, I took my mother’s prescription for some kitchen remedies, and made myself one large pot of Chicken soup and one pot of red bean soup.

Unlike the dried legumes of the Western World, Red Beans (红豆 or, adzuki beans in Japanese) are more commonly found in desserts than in any savory form. Boiled down and cooked with sugar, red bean is traditionally found in paste-form, stuffed into fluffy white pastry doughs in China or chewy unctuous mochis in Japan. In Taiwan, red beans are often cooked down in soups for an equally homeopathetic and sweet delight.

According to Dr. Mom, red foods such as red beans and dried chinese dates should be eaten to boost a person’s blood. Blood supply? Blood levels? Blood cell count? Who knows, the Chinese just say blood. So when she heard that my white blood cell count came back surprisingly low in my initial blood tests, her first reaction was to order me to make myself a pot of red bean soup. So much for sticking around the house and getting some rest, huh?

This soup might not be for everyone. If you’re like a lot of people I know, the thought of sweet beans might make you gag. Personally though, to me this soup is comforting and appealing. It can be enjoyed hot or cold, depending on the weather outside or your mood, as a snack or a dessert. It’s extremely simply, and can be plain (like the recipe I provided) or spiced up with additional ingredients, like the red chinese dates that I added, too. And according to Mom, it can cure ailments.

Where does an hour and a half down the Li River take us?  Nowhere, really.  But in the middle of nowhere is a small town called LiuGong (留公). 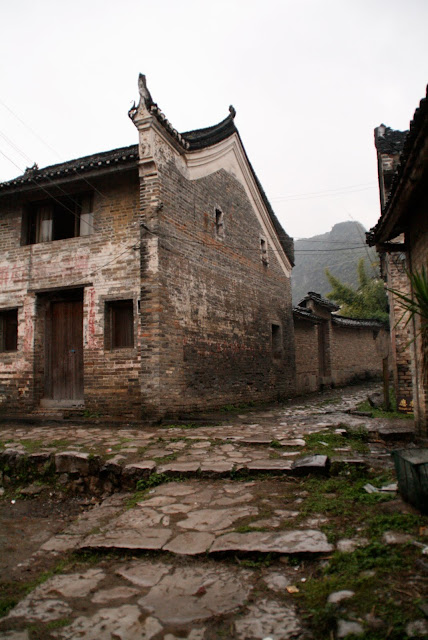 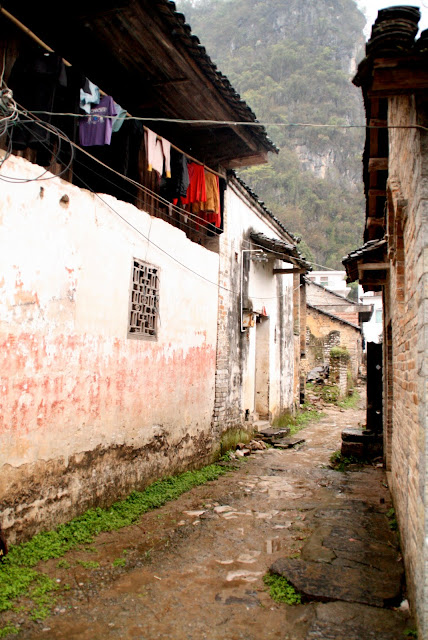 In our exploration of the small village, we came across as family restaurant on the top of a hill overlooking the river. Built on a cement slab with a stone roof that looked like a carpark, the aesthetic was pretty similar to the rest of the town.  A small group of Chinese tourists and a couple of Czech bikers were sitting around the fire pit in the middle of the concrete floor- so of course we were inclined to join. 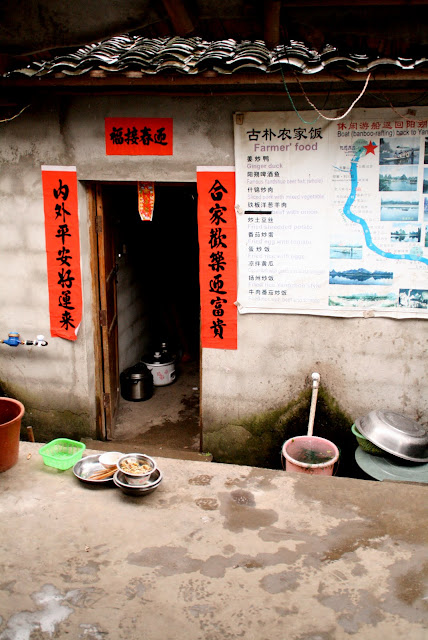 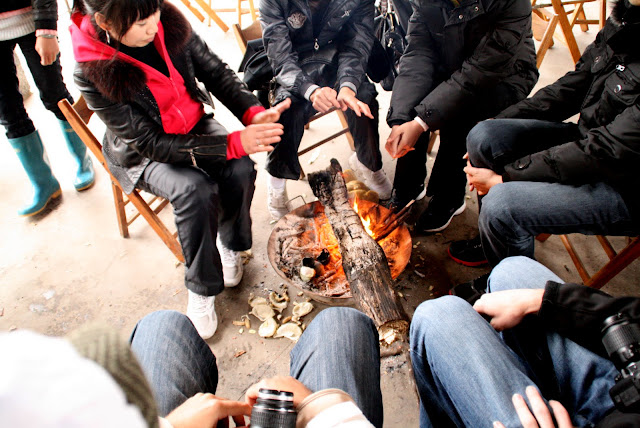 As the river and cold had built up our appetites, we ordered a few plates of homestyle fried rice.  I’ve just finished reading Jen Lin-Liu’s Serve the People- a stir-fried journey through China, and there are a few passages that jumped out at me while reading.  One is a bit of advice which was passed down to the author: “there is a difference between best restaurants and favorite restaurants”.  In the states, I don’t think I had much of a distinction.  I though Franny’s, or Prime Meats, and ok Blue Hill too, were simultaneously my favorite and the best restaurants.  But things differ in China, where class distinctions are so apparent, and there is such a huge jump between new and old.  The best restaurant in town might not be my most favorite, and vice versa. 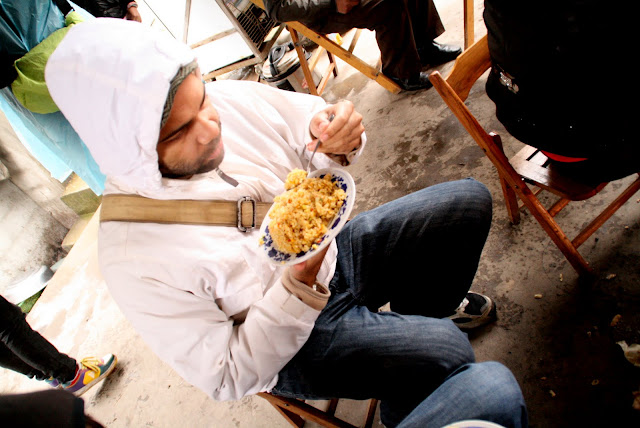 Something about this meal- eating on fold-out mini chairs on a concrete slab, among karsts rising out of the fog, with and international cast of characters snapping pictures left and right- I found to be so memorable and endearing.  One of my favorite meals in China so far- even if it wasn’t really a full “meal”.  I had ordered a tomato-beef fried rice, and each time my huge spoon hit the bottom of the shallow cheap plastic plates, I scooped another spoonful of beefy tomato-y rice into my mouth with glee. 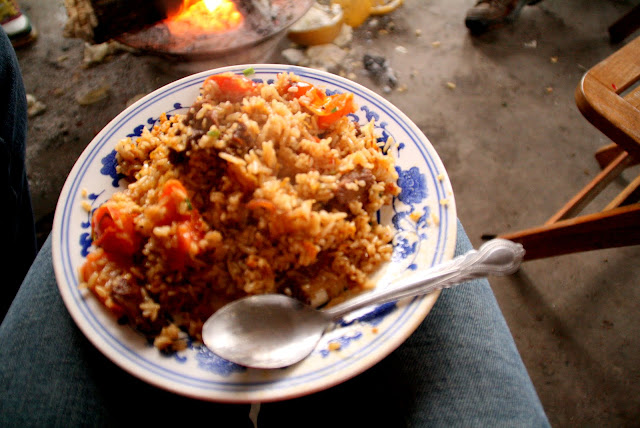 The Chinese do a lot of things right- math, gymnastics, fireworks….when it comes to food, there’s no shortage of success in Chinese cuisine, either.  I mean, c’mon, noodles?  Get out of town, there is no competition for hand pulled spicy beef noodle soup!

Like every other country, there are regional specialties within the cuisine.  Given the expanse that is China, there are obviously hundreds of regional delights found in the country.  Southern China in particular, where I am at, is known for its epicurean bravado- something that I’ve consistently thanked since I’ve been here.  It’s been said that the Cantonese will eat anything with legs, except a table, and anything with wings, except a plane.  People eat on the side of the road, they eat at all times of day, they eat not only to satiate their hungers but to sustain their health and to cure their ailments.  Food symbolizes wealth, it symbolizes generosity and hospitality.  The way they do food here is legit.

Growing up with Chinese food (and here I am certainly using the word generally and inclusively) I’d like to say that I am pretty familiar with most tastes and textures of the cuisine, and don’t really get weirded out by most things.  I mean, I love chicken feet, I love sweet red bean soup, I love pigs feet roasted braised in soy and star anise!!!!  So last weekend, when I was in Zhongshan and at a restaurant specializing in Cantonese delights, I was excited at the prospect to try some of the many famed regional specialties- sweet pineapple buns, roasted pigeon, a big ball of fried dough (more on this some other time)….

…and meat cookies.  I like dim sum.  Rather, I love dim sum.  I’ve eaten meat buns and meat biscuits, so when I was told there was a regional specialty called a meat cookie, I figured it couldn’t be too far from anything I’ve ever eaten.  Now, in chinese, the locals explained this so-called meat cookie literally translates into “chicken (something) biscuit”.  But ironically, no chicken is found anywhere in the biscuit.  Rather, it is a pork mixture topped with a pastry glaze.  A mixture of salty and sweet, I was told.  When this was explained to me, I pictured a juicy, savory meatball covered with a fine phyllo-like pastry brushed with a sweet glaze.  Yum!  Salty and Sweet, just like kettle corn.

Although we tried many things at our table that night, the meat cookie was sadly not one of them.  But fear not fellow foodies!  This restaurant was part restaurant and part foodie delight take-home playland, where you could watch the regional delights being made as well as order them to take home.  The DiploMan and I spent half an hour after dinner and ended up taking home half a dozen meat cookies, along with sticky rice stuffed in bamboo leaves, meat dumplings wrapped in fish skin, and pineapple buns- quite greedy of us, yes.  Regretful?  Never.

The next day for lunch, I toasted these meat cookies- in our American, Black&Decker; toaster oven (some things just cannot be compromised, my friends).  They looked just like they did when they came out of the oven the first time around- warm to the touch, crispy on the outside and slightly browned.  I took a bite, chewed for a bit, chewed some more…..

It was gross.  I spit it out.  The meat part was a super sweet, gelatinous piece of chewy cookie, similar to the taste and texture of a pork flavored jelly belly, if there was one.  The sweetness stayed in your mouth along with an odd, fatty pork feeling and taste.  It was the most confusing bite I’ve ever had.  I stand by my statement that the Chinese do a lot of things right, but the meat cookie is certainly not one of them,